There Are Four Main Causes of Sea Level Rise

Two Causes Are Global, and Two Are Local

Ice melting from land into the ocean, warming waters that expand, a slowing Gulf Stream, and sinking land all contribute to sea level rise.1 Although a global phenomenon, the amount and speed of sea level rise varies by location, even between the East and the West Coasts. While the slowing Gulf Stream and sinking land only affect some areas, and at varying rates, ice melt and thermal expansion (warming waters that expand) are considered global causes of sea level rise everywhere.

Over 1,700 trillion pounds of glacial ice melts from the land into the sea each year.2 There are two types of glaciers: continental (ice sheets and ice caps) and alpine (glaciers in mountains and valleys). As glacial ice melts, sea levels rise everywhere, and ice from as far as Antarctica can impact America’s coast. 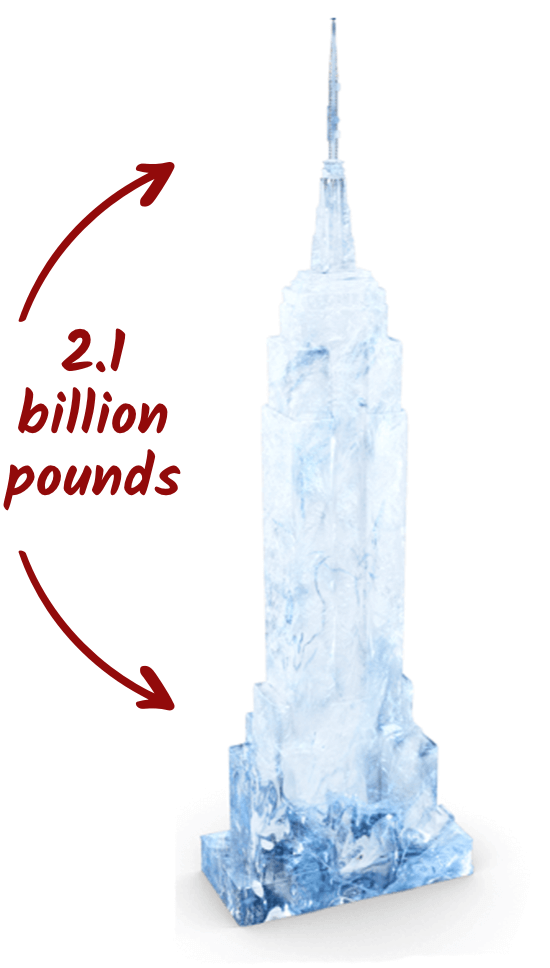 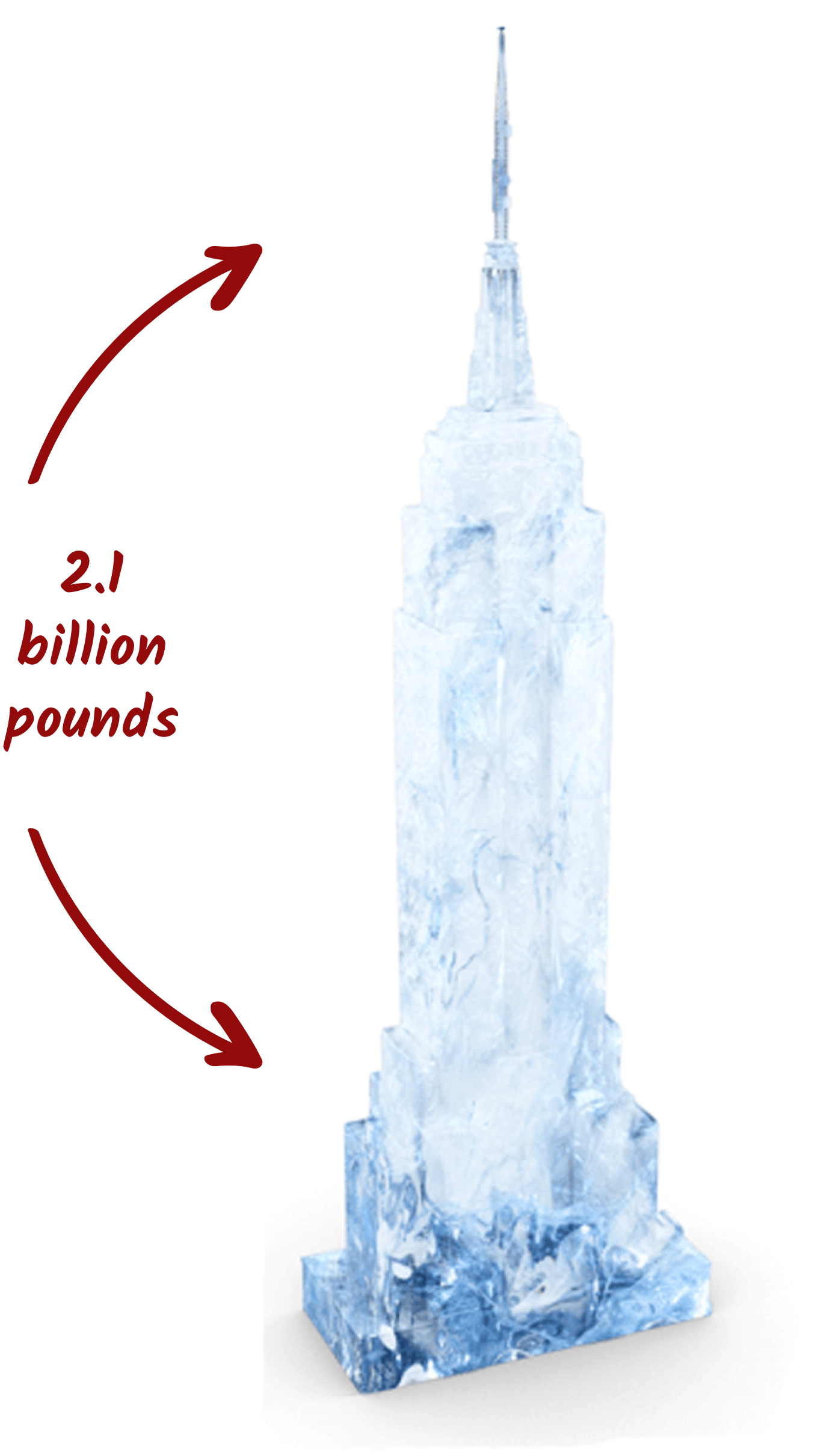 Every year, the equivalent of over 800,000 Empire State Buildings made of ice fall into the oceans.

Antarctica and Greenland are the greatest source of ice melt

While mountain glaciers and ice caps have been melting for hundreds of years research shows that ice sheets in Antarctica and Greenland are now melting much faster, and are the biggest source of ice melt.3

While it can be difficult to measure ice melt, a new NASA satellite, called ICESat-2, launched in September 2018 and is expected to help scientists gather enough data to gauge future changes of the Greenland and Antarctic ice sheets and estimate their annual height to within the width of a pencil.4

Antarctica and Greenland Ice Melt Since 1992

Antarctica is the biggest threat

Scientists worry about Antarctica the most because it’s nearly twice the size of the United States and contains 90% of the earth’s ice. A portion of this ice sits on land that’s below the sea level, which means it can be impacted by ocean currents that can accelerate ice melt. The ocean has already begun breaking chunks off of the ice, eroding it from below.5 This is causing huge parts of the ice sheet to collapse into the ocean.

Since scientists know that Antarctica is melting, but not how much of it will melt or how fast, scientists have created different forecasts using their best estimates. NASA’s ICESat-2 satellite will help scientists better understand ice melt and forecast these changes, but it’s currently estimated that at the end of this century, Antarctica could add anywhere from less than a foot to more than six feet to sea level rise, making it the greatest potential contributor by far.6

Thermal expansion is the scientific term for expanding water, and it is responsible for about one-third of global sea level rise.1 As the ocean gets warmer each year, it expands, raising the sea level.

1.2 degrees may not sound like much, but for something as massive as the surface of the world’s oceans, which heats up very slowly, 1.2 degrees is significant and has caused more than 6 inches of sea level rise.7 This is because warmer water expands, raising the sea level everywhere.

Recently, the ocean has been getting progressively hotter. Thermal expansion has increased, causing sea levels to rise 75% faster over the last 10 years, as compared to previous years.1

The world’s oceans are all different temperatures, so the exact amount of thermal expansion depends not just on how warm the ocean is, but also on which parts of the ocean warm up. The temperature of the ocean varies depending on the location and depth of the water. Deeper water expands more than shallow water as it warms up, because deeper water is under more pressure from the water above it. This pressure compresses the water, so it has a greater capacity to expand, and can contribute more to sea level rise. That’s why it not only matters how much the ocean warms, but also, which areas of the ocean are getting warmer and expanding.

Thermal expansion has led to a sea level rise that’s equivalent to adding 142 million Olympic sized pools of water to the ocean each year.1

Does Sinking Land Vary by Location?

There are two main causes behind sinking land

As people pump water out of the ground, gaps form where the water used to be, causing the land to sink in order to fill the empty space. This leads to approximately 80% of the land sinkage in the US.8

The East and Gulf Coasts are most impacted from sinking land

Sea level rise is fastest along the East Coast and the Gulf Coast, where the land is sinking by one inch every five to ten years. In contrast, the land in Alaska is rising at a speed of over an inch every three years, so sea level rise is slower. Most coastal towns fall somewhere in between, with slight land sinkage.10 Click here to learn about sea level rise in your state. 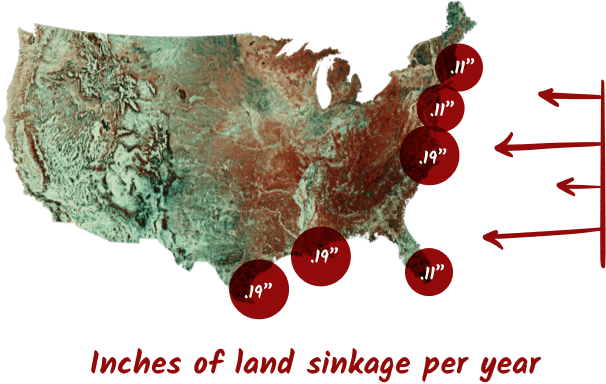 What is the Gulf Stream?

The Gulf Stream is part of a vast oceanic conveyor belt system that moves water around the world’s oceans. The Gulf Stream moves north along the eastern coast of Florida until it takes a right turn at North Carolina, pulling water away from the East Coast. The amount of water circulating in the Gulf Stream is 150 times greater than the Amazon River, and moves at an average speed of 4 miles per hour.11

Because the Gulf Stream is slowing, less water is taken from the East Coast, leaving more water to pile up and causing the sea level to rise in places like Florida.

Ice melt is one factor slowing down the Gulf Stream

The Gulf Stream is complicated, and scientists are still debating important details, like how much it has slowed down across the whole Atlantic. The Gulf Stream circulates ocean water in a loop, from the south to the north and back again. Warm salty water travels from the south towards the north, where it cools down. As it cools down, it contracts and becomes heavier, which causes it to sink. This creates a circulating current of water.

The slowing of the Gulf Stream impacts the East Coast

Recent studies have suggested that short-term changes to the Gulf Stream can add one to three feet to tides over a day or a week.12 If this occurs when there are already high tides or a rain storm, it can cause more extreme flooding. 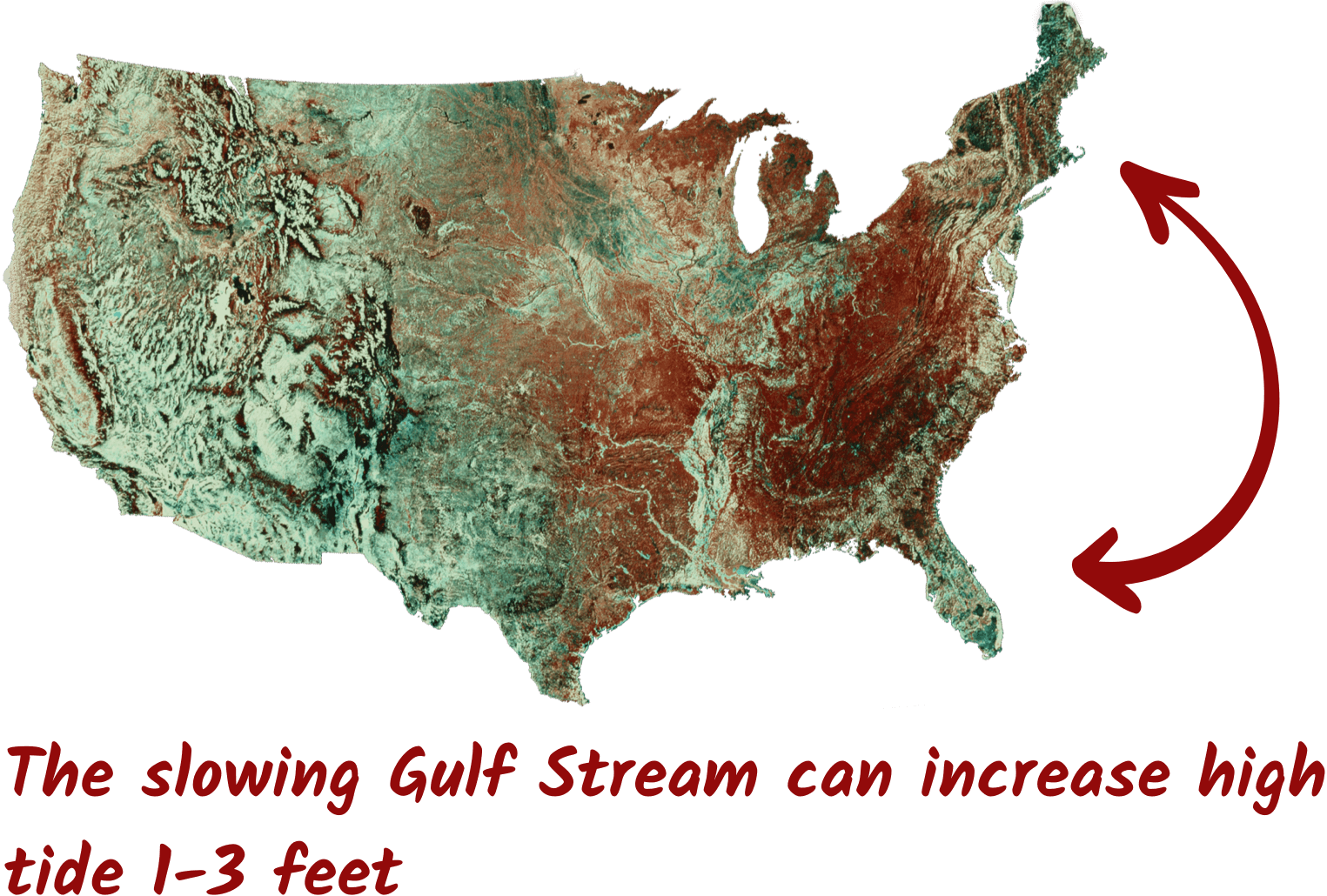