And It's Costing Over $4 Billion

The sea level around Florida is up to 8 inches higher than it was in 1950.1 | 2 This increase is mostly due to ice melting into the ocean and, complicated by the porous limestone that the state sits on, it’s causing major issues. Many traditional methods to solve for sea level rise and flooding in Florida won’t work, because water can flow through the porous ground, up from below, and under sea walls. In Miami-Dade County, the groundwater levels in some places are not high enough relative to the rising sea levels, which has allowed saltwater to intrude into the drinking water and compromised sewage plants. There are already 120,000 properties at risk from frequent tidal flooding in Florida.3 The state is planning over $4 billion in sea level rise solutions, which include protecting sewage systems, raising roads, stormwater improvements, and seawalls.

The sea level around Virginia Key, Florida, has risen by 8 inches since 1950. Its speed of rise has accelerated over the last ten years and it’s now rising by 1 inch every 3 years.2 Scientists know this because sea levels are measured every 6 minutes using equipment like satellites, floating buoys off the coast, and tidal gauges to accurately measure the local sea level as it accelerates and changes.4

While there are four causes of sea level rise in Florida, melting ice from the North and the South Poles and slowing of the Gulf Stream are the two largest contributors. Because the rate of ice melt has been increasing significantly since 1992,5 and the fresh water melting into the ocean has been slowing down the Gulf Stream,6 Florida is particularly vulnerable to an increased rate of sea level rise in the future. To learn more about these causes, click here.

In Florida, this is when the combined gravitational pull of the moon and the sun pulls water inland and when the Gulf Stream slows, which allows the water to rise even more. This causes unusually high tides called king tides. In places like Southeast Florida, king tides are typically nearly a foot higher than normal tides.1 Add that to the 8 inches of sea level rise since 1950, and you end up with flooding even on sunny days.

In Florida, the bedrock beneath the state is porous limestone, which acts like a hard sponge full of holes and allows groundwater to rise at the same rate as the ocean. This can make flood mitigation efforts complicated, as some traditional methods won’t work. Water can flow through the porous ground, up from below, and under sea walls.

Sea level rise presents diverse, complex challenges to southeast Florida, with flooding and water-supply impacts that extend from the coast to the Everglades.

In the last decade, the speed at which Florida’s sea level is rising has increased and is now rising by as much as 1 inch every 3 years.2 Around Miami, it took around 31 years for the sea level to rise by 6 inches.2 Scientists now forecast that in just the next 15 years, the sea level will have risen by another 6 inches.7

Below you can see the range of the NOAA and USACE high and intermediate forecasts for various locations around Florida.8 Currently, the USACE high forecast, seen as the darkest red line, is the most likely projection.

Jim Cason, Former Mayor of the City of Coral Gables 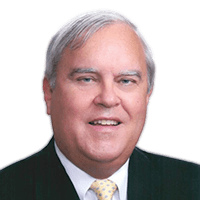 When the ocean rises high enough, high tides cause flooding even on sunny days. Even though the sea level has only risen by around 3 inches, tidal flooding has increased by 352% across Florida since 2000.9

In 2017, Hurricane Irma made landfall in Cudjoe Key as a Category 4 Hurricane. Irma caused over $50 billion in damages and destroyed 25% of the Keys.11 Without sea level rise, Hurricane Irma’s 8 foot storm surge would have been lower.12

What's at Risk in Florida?

There’s a lot at risk from sea level rise and flooding in Florida. When sea levels rise and water spills over into the streets, it puts not only homes and cars at risk, but can cause roads to be shut down and prevent access to important infrastructure like schools and hospitals. As the ocean rises higher, the salty water from it can mix with drinking water, ruining water wells. It can also make sewage systems back up into the streets, creating health hazards. In Miami-Dade County, the groundwater levels in some places are not high enough relative to the rising sea levels, which has caused saltwater to intrude into the drinking water.13 In Southeast Florida, there are 12 wastewater treatment plants with property 1-3 feet below the current sea level, which is still rising.14

The ocean is salty, and as it rises higher, that salty water sometimes will mix with drinking water, ruining water wells.

High seas mean more underground pressure on sewage systems. If these systems are damaged, it can be a costly and smelly problem as well as a health hazard.

Florida is spending over $4 billion

Some cities have sufficient resources to deal with this problem while others do not. Florida will need solutions at the individual, local, state, and federal levels to protect its coastal communities.

Miami Beach has allocated $400 million towards seawalls, pumps and raising roads in their plan.15

Fort Lauderdale has developed a $1 billion stormwater plan to deal with increasing flooding.16

Broward County has developed a $250 million plan to protect sewage systems from flooding.17